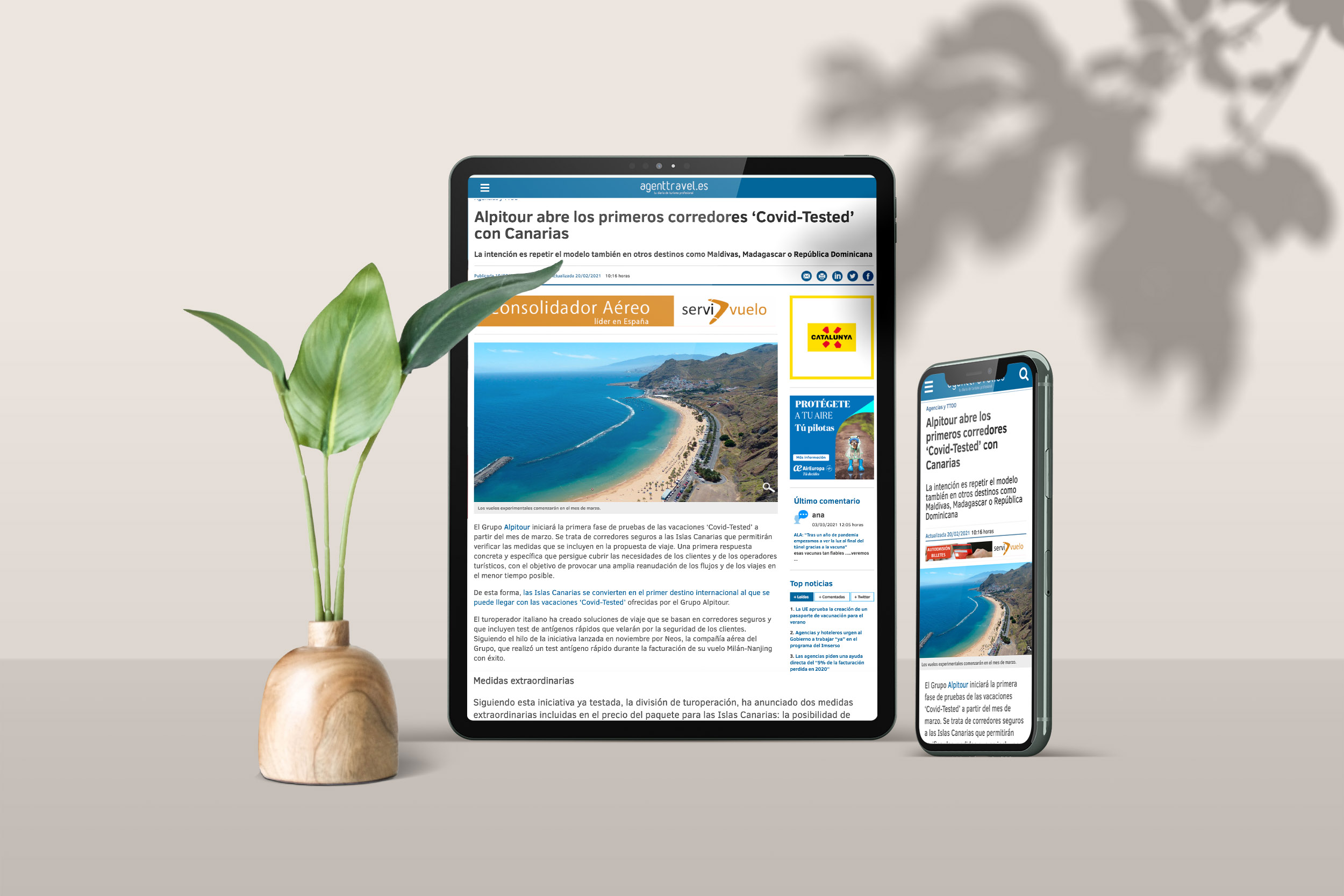 Alpitour opens the first ‘Covid-Tested’ corridors with the Canary Islands.

The intention is to repeat the model in other destinations such as the Maldives, Madagascar and the Dominican Republic.

Experimental flights will begin in March.

The Alpitour Group will begin the first test phase of ‘Covid-Tested’ holidays from March. These are safe corridors between Italy and the Canary Islands which will allow measures included in the travel proposal to be verified. This first concrete response will meet needs of customers and tour operators, aiming to a create a widespread resumption of travel in the shortest possible time.

The Canary Islands will become the first international destination that can be reached through the ‘Covid-Tested’ holidays offered by the Alpitour Group.

The Italian tour operator has created travel solutions based on safe corridors which include rapid diagnosis testing, ensuring customer safety. This follows the initiative launched in November by Neos, the Group’s airline, which successfully carried out rapid diagnosis tests during check-ins on the Milan-Nanjing flight.

Following this initiative which has already been trialled, the tour operating division has announced two extraordinary measures included in the Canary Islands package price: the possibility of carrying out the molecular swab test before departure from Italy and a second test managed directly by the Group, both financially and operationally, which will be carried out on customers in resort before their return. This will reassure travellers with the knowledge that fellow passengers, as well as themselves, have a negative result before travel. It will also help to make travel bureaucracy much more convenient.

The Neos flights will start on Saturday 27 March from Milan Malpensa and Saturday 3 April from Verona to both Tenerife and Fuerteventura. The selected hotels will be contracted by Alpitour and Francorosso; Jacaranda and H10 Costa Adeje Palace in Tenerife and Occidental Jandia Playa and Barcelo Castillo Beach Resort in Fuerteventura, respectively.

The rapid diagnosis tests are an addition to other initiatives planned by the Group to support sales and distribution through greater flexibility. This is reflected with more possibilities of modifying and redeeming vouchers, as well as protection against covid-19.

The Alpitour Group inaugurates what it hopes will be the new procedure for international holidays, following the first experimental flights in the Canary Islands. The intention is to repeat the model in more destinations considered suitable, such as the Maldives, Madagascar, Zanzibar, Dominican Republic, Red Sea, Mexico and other destinations that have been inaccessible for a year and hopefully not much longer.